VIDEO: The History of Infographics

Infographics have come a long way. The number of available infographics and images online are increasing by 1 percent every single day. But where did infographics come from and how did they get to be so popular?

Infographics, by definition, mean images that share information in visual ways. When you break it down like that, so many pieces in our history actually qualify as infographics. Let’s take a little trip back in time, shall we?

Where did infographics originate?

Infographics are images that represent facts and data. Think about the drawings on cave walls or the hieroglyphs in Ancient Egypt! They represented letters, words, and full sentences with images alone.

Maps are infographics, too!

The first instances of infographics as we know them today – as data made visual – dates back to the late 1700s with a chart of wheat prices and labor wages.

The start of data visualization

And then there was Edward Tufte. 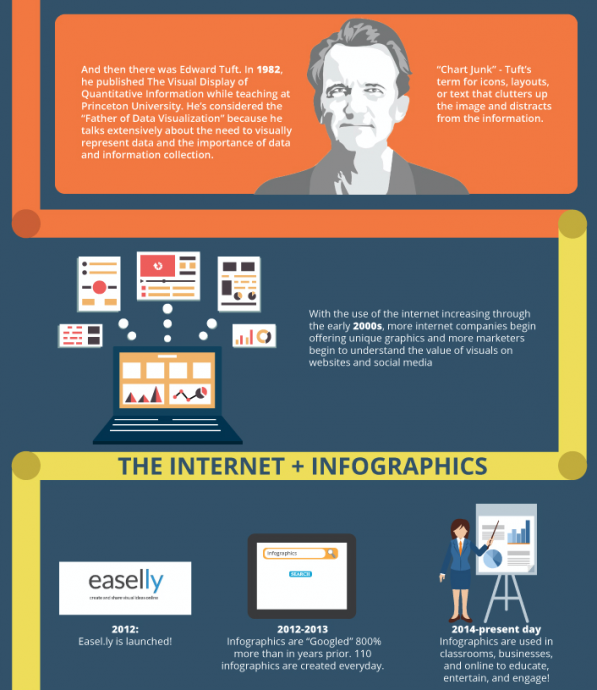 With the use of the internet increasing through the early 2000s, more internet companies begin offering unique graphics and more marketers begin to understand the value of visuals on websites and social media

Why are infographics so popular?

Want to use the full infographic? Feel free to download it! We’d really appreciate a quick note on attribution or link to this blog post though.

It’s your turn to make history and share your stories, ideas, and insights through infographics! You can either start with our simple infographic maker tool or hire a professional data visualization designer if you’re pressed for time!

*Editor’s Note: This blog post was updated on April 10, 2019 for accuracy and comprehensiveness. It was originally published on February 20, 2017.

More to learn from the blog…

How to Use Infographics for eLearning + Downloadable Templates

eLearning has enjoyed steady growth for the past decade with the rise of distance learning tools and massive open online courses (MOOCs). ...

How Infographics Can Be Used for Any Classroom Subject

As a teacher or educator, you’re probably using visuals aids or a projection from your computer in the classroom. You might even be teach...

A Beginner’s Guide to Gated Content for High-Quality Leads

You probably know what gated content is, even if you’ve never heard of the term itself. If you’ve ever asked or have been as...

Easelly empowers you to design infographics better and faster. Anyone can visualize information with Easelly – we’re all in this together.

Easelly empowers you to design infographics better and faster.
Anyone can visualize information with Easelly – we’re all in this together.